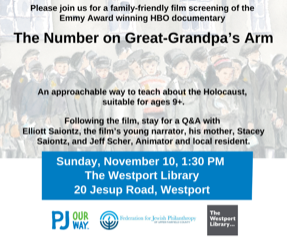 On November 10th at 1:30PM, The Westport Library will be screening HBO’s Emmy Award winning 19-minute documentary, “The Number on Great-Grandpa’s Arm.” This short film follows an intimate conversation between a young boy and his beloved great-grandfather, an Auschwitz survivor, sharing memories and lessons of the Holocaust with a new generation. The screening will be followed by an audience Q&A with Elliott Saiontz, the film’s young narrator; his mother, Stacey Saiontz; and acclaimed artist Jeff Scher, a Westport resident, whose rotoscope animation brings the film’s archival footage and photos to life.

“The Number on Great-Grandpa’s Arm” is an approachable way to teach about the Holocaust, suitable for ages 9+. This film can help our youngest generation understand the Holocaust, while teaching the importance of standing up against bigotry and hatred, and the transformative power of hope.